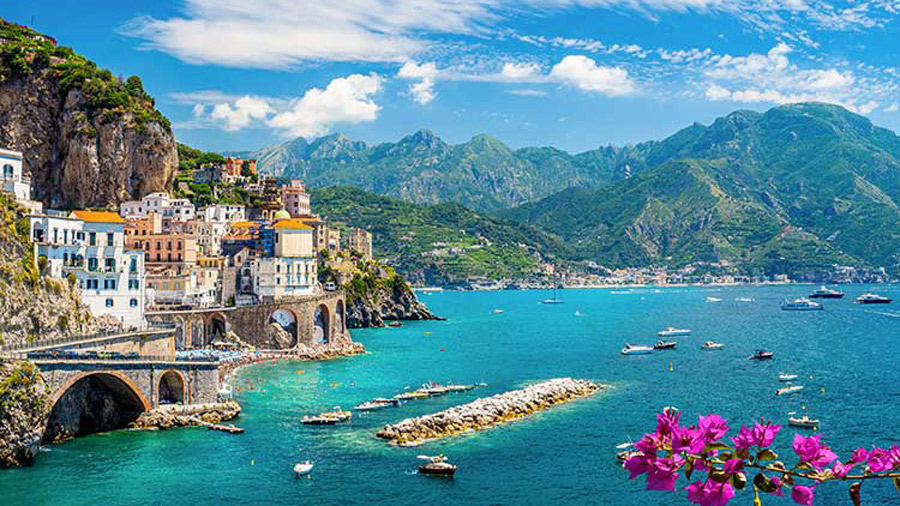 The city of Sorrento, from which the whole territory that, perched on the Lattari Mountains, separates the Gulf of Naples from that of Salerno, takes its name, is a renowned destination for international tourism: lying on a large tufaceous terrace overlooking the sea, is a small and quiet resort famous for its villas, hotels, parks and gardens, as well as for its beautiful views and characteristic citrus groves.

Of Greek origin, and then grown under Roman domination, Sorrento today gravitates around Piazza Tasso and Corso Italia (on which the Duomo stands), from which you can reach the sea view through a maze of narrow streets full of characteristic and lively commercial establishments. The most evocative panorama is the one observable from the belvedere of the Villa Comunale, which opens onto the port and the whole gulf of Naples; from here, a narrow descent allows you to reach the bathing establishments of the Marina Piccola and the port itself, with connections to Naples and the main towns of Campania.

The extreme tip of the peninsula, called Punta Campanella because in the past a watchtower signaled pirate raids with the sound of a bell, is separated from Capri (which in ancient times was also connected to the mainland) by a short and turbulent arm of sea; the whole surrounding area, from Sorrento on the Gulf of Naples to Positano on that of Salerno, is today a protected marine area, guarded by the FAI.

The southern side of the territory, which is a prelude to the Amalfi Coast, is instead characterized by barren and steep landscapes, largely uncontaminated, thanks to the lesser presence of inhabited areas.

At the moment the connections to Sorrento are offered from Naples through Alilauro Volaviamare with fast means and a journey of 35 min.